Mathias Enard is in London to launch Tell Them of Battles, Kings, and Elephants, his novel translated by Charlotte Mandell and published by Fitzcaraldo Editions.

Invited by the Institut Français' Book Office, Mathias Enard started his London programme at the Festival of Italian Literature in London on Sunday 28 October, where he participated in 'Long live the European novel', a panel discussion with Italian writer Nicola Lagioia on what is the European novel in the age of Brexit and migratory humanitarian crisis in Europe. Tonight, Mathias Enard will present his recently translated book Tell Them of Battles, Kings, and Elephants at the London Review Bookshop in a talk chaired by Turkish novelist Elif Shafak. Finally, he will also launch his novel at the French-British library Caravansérail on Tuesday 30 October with short readings, drinks and both English and French versions of the book available to purchase.

Tell Them of Battles, Kings, and Elephants (originally Parle-leur de batailles, de rois et d'éléphants) was published in 2010 by Actes Sud. It tells a fictional part of the life of Michelangelo. A journey to Constantinople, where Michelangelo is invited by the sultan to design a bridge over the Golden Horn. The novel shows a tolerant & welcoming historical city which used to take in Jews that were being chased out by catholic kings. It won the Prix Goncourt des lycéens 2010.

By releasing Tell Them of Battles, Kings, and Elephants, Fitzcarraldo Editions is publishing Mathias Enard's 4th novel in English, translated by Charlotte Mandell. 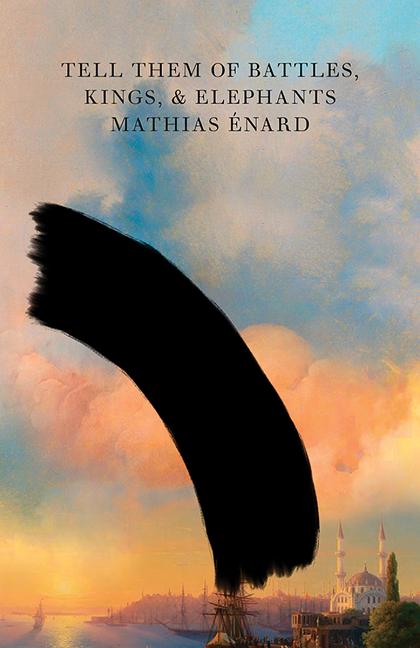 Who is Mathias Enard?

Mathias Enard was born in 1972 in Niort. He studied at the Ecole du Louvre before studying Persian and Arabic at the INALCO. He spent long periods in the Middle East before settling in Barcelona where he worked with several cultural magazines, translated works from Persian and Arabic, and also taught Arabic at the university. He lived there fifteen years, interrupted in 2013 by a writing residency in Berlin. His work as an author started with La Perfection du tir, published in 2003 by Actes Sud, a narrative novel  about a sniper during war, taking place in a country that he does not mention, but could certainly be Lebanon.

His first novel was well awarded: it won the Prix des cinq continents de la francophonie (literally 'Prize of the five continents of the francophonie') and the Prix Edmée-de-La-Rochefoucauld, an award that celebrates author's first novels. In 2008, Actes Sud published Zone, a novel written in the first person, with a single long monologue of 500 pages telling the story of a man who changes his identity after having worked for French intelligence services and carries with him a lot of information about the violent history of the Zone - the lands of the Mediterranean basin, Spain, Algeria, Lebanon & Italy. The book won several awards, including the Prix du Livre Inter and the Prix Décembre, and won the Liste Goncourt/Le Choix de l’Orient, the Prix littéraire de la Porte Dorée and the Prix du Roman-News for Street of Thieves. In 2015, Mathias Enard won the Prix Goncourt for Compass, the story of Franz Ritter, a musicologist who,  during a sleepless night in Vienna, looks back on his life, his career, his stays in the Orient and his lover Sara. He was also shortlisted for the 2017 Man Booker International Prize, the leading literary award in the English speaking world, for Compass.

- Tell Them of Battles, Kings, and Elephants, translated by Charlotte Mandell (2018, Fitzcarraldo Editions)

More info on his events:

Festival of Italian Literature in London

If you want to discover Mathias Enard resources on Culturethèque click here.